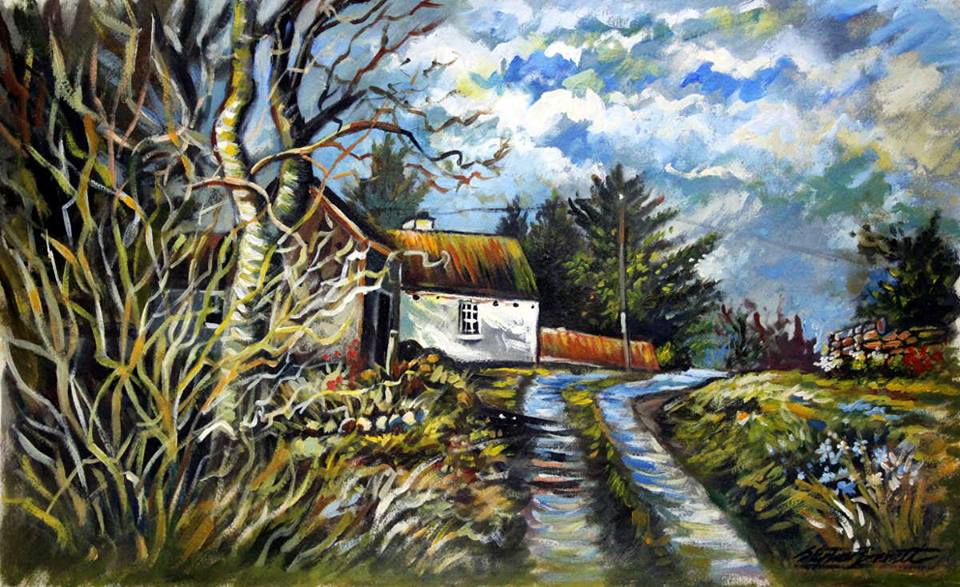 “I was inspired by the people of Donegal and enthralled by their way of life – hardworking by day in the fields or the bog, but always ready to enjoy themselves at night. The sing-songs, the fiddle music, the storytelling, the dancing and the natural humour of the people made a powerful and lasting impression on me. I felt at home here and the urge to come back to live and paint in Donegal was born in these early days.”

Stephen Bennett was born in London, his father having emigrated from Ardara, Co. Donegal. He graduated with an Art diploma from Barking College of Art and Design in 1973. Stephen then began a very successful career as a commercial artist, working for leading London advertising agencies for the next 18 years.

He worked as a visualiser/illustrator on the accounts of companies such as British Airways, Cadbury’s, B.P. etc. and was part of award-winning creative teams while working for Saatchi & Saatchi and other top agencies.

Working as a fine art painter in Donegal

Stephen left advertising in 1992 to follow his lifelong ambition of living and working as a painter in Donegal. He now lives in Ardara and welcomes visitors to his studio gallery beside his home, on the Wild Atlantic Way.

Having left the constraints of the commercial world behind him, Stephen set out to find his own way of painting. Drawing his inspiration from the people and landscape around him he has developed a unique and expressive style and is now among the best known Irish artists. Stephen loves to experiment and enjoys working in a variety of media including acrylic, oil pastel, mixed media and gouache. The subject matter of his work is varied, including both figurative paintings and landscapes but he has a special interest in people in their day to day activities.

His reputation has grown and he is now an established exhibitor in galleries throughout Ireland. Stephen represented Ireland at the Florence Biennale in 2005 and was shortlisted for the Royal Arts Prize in London’s Galleria Pall Mall in 2019. His paintings are included in private collections worldwide.

Apart from painting Stephen is a radio presenter, an advocate for local foundations and has released albums with profits going to great charities.

As an artist with a special interest in portraiture and figure painting in general, Stephen accepts commissions for portraits which he will undertake in a variety of media to suit the client. The portrait can be undertaken in pencil, watercolour, acrylic or mixed media and the price will depend on the technique chosen by the client