Conal opening the Ballroom in the Nesbitt Arms 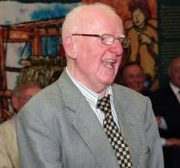