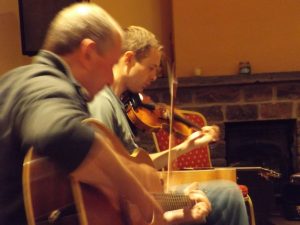 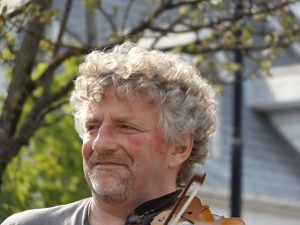 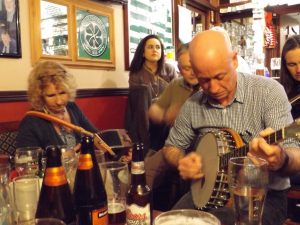 The Cup of Tae Festival which took place in Ardara over the May Bank holiday Weekend was a again an outstanding success with visitors from all over the world attending .This year again a number of visitors from Japan and Colombia along with people from the USA and all over Europe enjoying the festival .The festival got off to a great start on Friday night in the Heritage Centre when one of Ireland’s foremost fiddle players Martin Mc Ginley was honoured. The cream of musicians were there to honour him with Shane Bracken, Jim and Fiona Byrne,Ted Ponsonby,Ciaran Mooney and the group “Mind your Quavers” led by Seamus Maguire adding to a wonderful start to the concert. Later previous recipients of the honour Danny Meehan, Paddy Mc Menamin, Rita Gallagher and Frank Kelly performed as did Martin’s niece Maeve Kinsella. Afterwards the night finished with great music coming from the various pubs in town. This year the schools of music were truely outstanding with master tutors Ciaran Mooney and Martin Mc Ginley with Donna Harkin doing the juniors.  This was a wonderful combination and this was the biggest attendance at any school and the committee are particularly pleased that their initial idea of making a contribution to retaining our tradition  music  is being realised. The  musical recitals in the Heritage Centre at lunchtime Saturday and Sunday were fantastic with local musical star Michael O Rourke showing how he makes fiddles and also telling the story of John The Tae and playing his music.  This was followed by Harpist Orla Sheridan and local musical star of the future Bradan Shovlin on fiddle and finishing with the beautiful tender tones of Rita Gallagher Tg4 singer of the year 2017 and then Sunday’s recital had the group Ciadramh from County Cavan ably accompanied by Tony Finnerty. The Packie Manus Byrne Concert in the Corner House on Saturday was just a wonderful event with songs and stories about the life and times of the great man who would have been one hundred years old this year, this event has always been organised and led by James Keeney. Again Saturday night saw huge numbers of musicians in town and wonderful music could be heard throughout the town and even an open air session at midnight on the diamond. Sunday saw the schools of music finish with a recital in the Heritage Centre with all students playing all the new tunes they had learnt over the weekend, they later did an open air session on the diamond. The the final event of the festival is the John The Tae Concert in the Heritage Centre which like all events was packed and again wonderful talent was on display. Ardara was blessed with dry weather for the weekend which makes so much of a difference. Once again we had a truly wonderful festival and we were proud to honour and salute a wonderful musician and personality Martin Mc Ginley.  For more information, The Cup of Tae website can be located on this link: http://cupoftaefestival.com/ or phone Stephen on 087-2424590.

There will be a charity Ceili, Jiving, Sets and Old Time Dance in The Mill Park Hotel, Donegal Town on Wednesday, 10th May. Dancing is from 9 to 12 p.m. and music will be by Ceili Time. Supper will be served. Tickets are €10, and all proceeds are in aid of both Donegal Hospice and North West Hospice. There will be all kinds of dancing with spot prizes and it will be a very enjoyable night while supporting worthy causes.

A mental health information evening will be held in The Mill Park Hotel on Wednesday 17th May, from 6pm to 9.30pm. Talks on the evening include dealing with depression in later years, dementia, carers experiences, legal planning for the future, home security and new suicide services. Admission is free and everyone is very welcome.

The Parish Church of St. Connall’s  Ardara, would like to thank all those who attended its spring coffee morning held at Teague’s Bar, Ardara last Friday. Particularly well supported, the annual fund raising event also included a cash prize draw with three lucky winners. The organisers also thank the many people who contributed to the coffee morning.

The next big event will be The Melting Pot Festival, which will be held on the June Bank holiday weekend. This is in conjunction with the Ras Dun na nGall which also takes place that weekend. Further details to follow soon.

The Blue Grass Festival promises to be a real treat this year. Pat has secured some of the biggest names in Bluegrass music to attend this year’s event. More details will emerge in the next few weeks.

The Johnny Doherty Festival is again looking like a massive sellout. This festival has really come into its own in recent years and headline acts will be announced shortly.