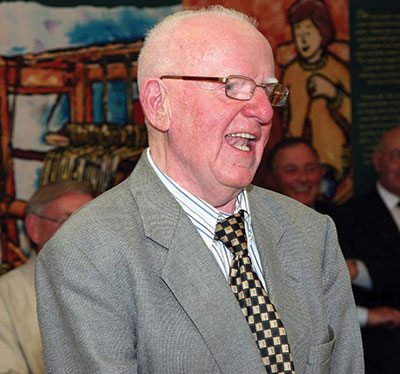 As a young lad taking my first job in the Nesbitt Arms Hotel in Ardara in the mid seventies, I was in awe of the spontaneous bursts of laughter I could hear from the Ballroom. It reminded me of the song of the time “The Laughing Policeman”. Bridie Gallagher was playing in the Ballroom that night and her greatest fan and close friend Conal Haughey was there, and it was his great laughter I was hearing on that first night.As my wonderful years in the employment of Con and Nessa in the Hotel passed, I was to realise the huge significance of Conal Haughey. Conal was the Head Chef in the Hotel and was the secret success of the Hotel as the outstanding eating house of its time.Conal trained as a Chef and will always consider his 17 years in Garrison, Co. Fermanagh, working for the McGovern Family as special years in his time. Sadly, one night coming back from Bundoran, Conal was to hear that McGoverns Hotel was blown up in an explosion, hence, ending a lovely period in Conals’ life. Being of international renown, Conal worked in the USA and later in the Montrose Hotel in Dublin.In the early sixties, John Byrne, the then owner of the Hotel in Ardara, wanted to develop the Hotel as a quality eating house and was delighted when Conal accepted the job of Head Chef. This was the start of a wonderful relationship between Conal and the Nesbitt Arms Hotel, up to this very day, even recently when the Hotel was launching the refurbished Ballroom, Conal was the Special Guest, something that meant a lot to him.For all of us and there were many of us who worked in the Hotel, we were so kindly employed by Con & Nessa, but of course Conal the Head Chef was the dominating force in the Hotel. Conal had exceptional standards of care, cleanliness, presentation and attention to detail that resulted in the Nesbitt Arms Hotel being the place to eat in South West Donegal in the seventies and eighties. It was not unusual to hear that the Dining Room was fully booked by 6pm at the weekends and even during the week on those wonderful Summers of that time. Staff and especially waitressing staff had to be dressed impeccably and if not they got the breath of Conal’s tongue and you would certainly be dressed proper the next time. His standards on hygiene were famous, many a staff member will remember sterilising the cutlery, hoovering the Dining Room and presenting the Dining Room as a standard laid down by Conal. That is seldom realised today. Conal’s presentation of food on a plate was the ultimate, he was a perfectionist there and for many of the guests having breakfast and listening to Conal giving a rendition of Bridie Gallagher’s “Cutting the Corn in Creeslough today” was a special memory for the guests and staff alike. Indeed, I think many guests came to the Hotel just to hear him sing. He is an was a beautiful singer and now and again some choice words directed at a waitress that wasn’t on the top of her game added handsomely to the moment. Those surely were the days.Conal Haughey was the most wonderful Ambassador for Ardara. He travelled extensively all over the world and stayed in the best Hotels, met the elite and all the time boasted about his wonderful beloved Ardara. Conal was and always will be Mr Ardara our greatest Tourism Ambassador of all times. I remember in my early days in the Hotel, Conal often sat at Reception when off duty or on his day off. Once, I recall a family inquiry of Conal about accommodation and Conal advised that the Hotel was full as it usually was those days so the family thanked him and proceeded to leave but Conal demanded they stay there until he got good accommodation elsewhere in Ardara probably with the late Mary Brennan or the late Peg Kennedy on the Diamond. That family were so appreciative of Conal’s help and I often thought this is what makes the place special and that is why Conal was such a great Ambassador.Conal has a wonderful sense of Ardara, of its people and has a wonderful ability to detail relations. Indeed, so many of our Diaspora or second generation, had their visit to Ardara hugly enhanced by meeting Conal who could trace all their family relations in the area.I personally enjoyed the period in my life when I had to go to Dublin weekly on business and Conal was always ever ready for the journey and he was such wonderful company on these days.Conal has had his share of health issues in recent years and he has fought the fight with dignity and we all hope he will be part of all our lives for many years to come. He is and always will be Mr Ardara with a special address of Ardara 4.