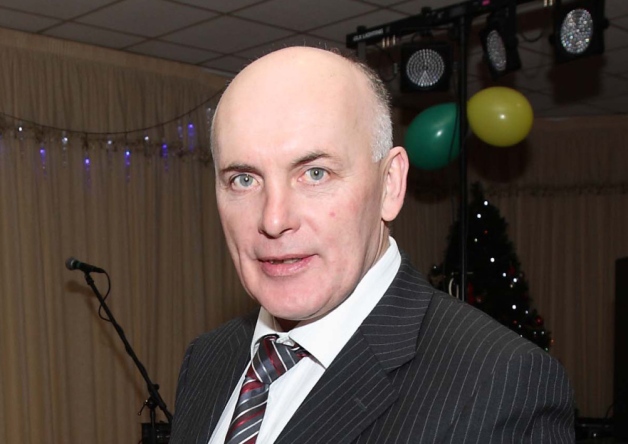 Anthony Molloy was born on the 28th May, 1962, to the delight of his proud parents Nora and the late Lanty Molloy of Leamagowra.  He was their seventh child at the time, their fourth son and Nora went on to have four other children to have a family of 12.  Honing his football skills on the rough pastures of his hillside home, at the National School at Crove and later at Meenaneary, it was however, just a stroke of luck for the Ardara Club, that the Molloy brothers headed down the ‘S’ to play their football and no ‘in through’.  Although their home was in the Parish of Ardara, their mother was McGonagle from Meenadreen and the family attended School at Cove and Meenaeary, where their school mates played for Naomh Columba or Kilcar.  Indeed the Molloy’s could easily have followed their friends into Páirc Na nGael or Towney, and little would have been remarked about it at the time.  Anthony followed his older brothers Connie, Lanty and Frank into the Green and Gold jersey at the age of 11 years.

His footballing career with the Ardara Club lasted for 21 years.  He won his first championship med in 1976 playing at U14 level and beat a fancied St Eunans side.  Anthony collected the first of what would be countless man of the Match awards in the process.  From his first Senior game in the 1978/79 Shield Final, to his last, in the 1994 Championship semi-final defeat, there were countless immaculate displays which did not really yield the honours that Anthony deserved.  Injury limited his involvement in the 1981 Championship victory to a ten minute cameo role, while three other County Final appearances in 1980, 83 and 84 ended in heartbreak for ‘Ludhóg’.

There were many highlights though, his most memorable being the 1983 U21 Championship win over Aodh Ruadh, when he was just simply awesome, lording midfield in both games in Fintra, against a highly rated Ballyshannon team.  Anthony also went on to sit in the two big ‘hot seats’ in the club, as manager of the Ardara Senior Team, and going on to hold the position of Club Chairman from 1998 – 2002, a period which saw the AIB Club f the Year Award coming to the Parish on two consecutive years, 2000 and 2001.

It was of course, as a County star that Anthony has become a National figure.  His first Donegal jersey came in 1978,a s a member of a highly talented Donegal U16 Team that travelled to Croke Park for a week-end, to play Dublin.  He was selected for the Co. Minor team of 1980, which, although beaten in the Ulster semi-final, was rated one of the strongest ever fielded by the County.  But it was’nt until he turned at U21 level in 1982, and that famous victory over Roscommon in Carrick on Shannon, that Donegal finally left all previous disappointments behind them and took a coveted national Title.  Anthony was a star at midfield in that win.

His inevitable senior debut came later in the same year, against Monaghan in the National Football league, and this game kick-started a Senior career that lasted until 123 games later, one of the longest careers in the County’s football history.  It was’nt however a career without its ups and downs.  He was soon to experience the ‘thin line’ between being carried off the field shoulder high, and trudging off on the losing side.  The 1683 Ulster Championship win was followed by heartbreak in the semi-final against Galway.  Molloy on the day with a knee injury sustained in an ESB match the previous Monday, an injury that had started to give trouble in1981, and that would continue to plaque him throughout his playing career.  The defeat still ranks as one of his greatest disappointments ever, one, he feels, that cost Donegal their first All Ireland title after Val Daly’s ‘fluke’ goal gave Galway a one point win.

It was however as a Captain that Anthony Molloy found his true niche in life.  He led Donegal to an Ulster title win in 1990.  A man of the match display against Liam Hayes and Meath in the semi-final, though was still not enough for Donegal to overcome the Royal County.  The next two years however, were to shape his life forever.  1991 was a difficult 12 months for Anthony.  He captained the team to a McKenna Cup win early in the year, but injury problems meant that he struggled to gain full fitness.  His role int eh Championship was limited to substitute appearances and as a result, he seriously contemplated his future in the Donegal jersey.

The wounds eventually healed, however, and the rest is history.  There was really only ever going to be one person who would lead Donegal to an All Ireland.  That was in the stars on that May day on 1962, and when the time eventually came, he rose to the challenge.  He reserved his best football for that summer.  Ulster Player of the Championship, and numerous other awards came his way and despite all, he still kept his feet on the ground.  After the victory over the Dubs in the All Ireland final, he really showed the Country how he had grown, not only as a player, but more importantly as a person.  His speech that day will go down in the annals as one of the most memorable of all time.

Things were never just the same for Anthony after that day.  The All Star he was denied by video evidence in 1990 was finally won.  And for the next six months he took a career break from the ESB to tour the Schools of the County with the Sam Maguire, as well as visiting most of the 32 Counties and the USA.  He was sought after everywhere, and everywhere he went he made new friends and left a lasting impression.  He played on through the 1992/93 National League and the decision not to rest him for a few months was to haunt the team later in the year.  The wear and tear on his famous knee limited him to just one appearance in the 1993 Championship, when he came on as a substitute in the famous Clones downpour against Derry.  The curtain was on the way down, though, and it ended after that 1994 semi-final defeat to Tyrone.  As he walked off the field, a dejected figure, those present that day knew that a great legend of Donegal was calling it a day.  He tried to give it one last shot for his Club that year, but the injury nemesis struck again in the Championship semi-final against Naomh Columba, to bring to an end, also, his time in his beloved green and gold jersey.

Next to Ardata and Donegal Anthony’s favourite ‘other’ team has always been Donegal new York, the team backboned by his brothers Connie, Frank and Lanty, who emigrated to the Big Apple in1982.  He travelled stateside regularly to play for the exiles, winning two New York Senior Championships in the process, in 1986 and 1992, and also worked there for short periods in the eighties.

Never one to walk away from a challenge, Anthony took to management after hanging up his boots.  He sought to pass his talents on to the County Minor teams of 1995/96 and 1999/2000, winning and Ulster title in his second years in charge, while in 1999, his team was only defeated in the Ulster Final by a replay against the eventual All Ireland champions Down.  Many of the young protégés that he took under his wing still hold fond memories of his stirring team talks and his motivational abilities.

To sum up the man that is Anthony Molloy, many words can be used.  His easy going personality has always been his best known attribute.  His familiar call “Yes there” is famous locally and is one he often uses when a person’s name has slipped his mind.  His pride in his roots has always been worn on his sleeve, and is something he has always felt very strongly about.  No one could command a dressing room like “Molloy” could, and no one could motivate his team-mates better when it was all to play for.  That famous day in 1992 will always be special for Donegal people, but it meant nothing like it does to the people of Ardara.  Our Anthony lifted Sam for Donegal and no other person will ever do it for the first time ever again.  Around about these parts, s far as we are concerned, Molloy is a legend, and that just about describes him better than anything else.

Other – 2 ESB All Ireland Championships with NW Boston