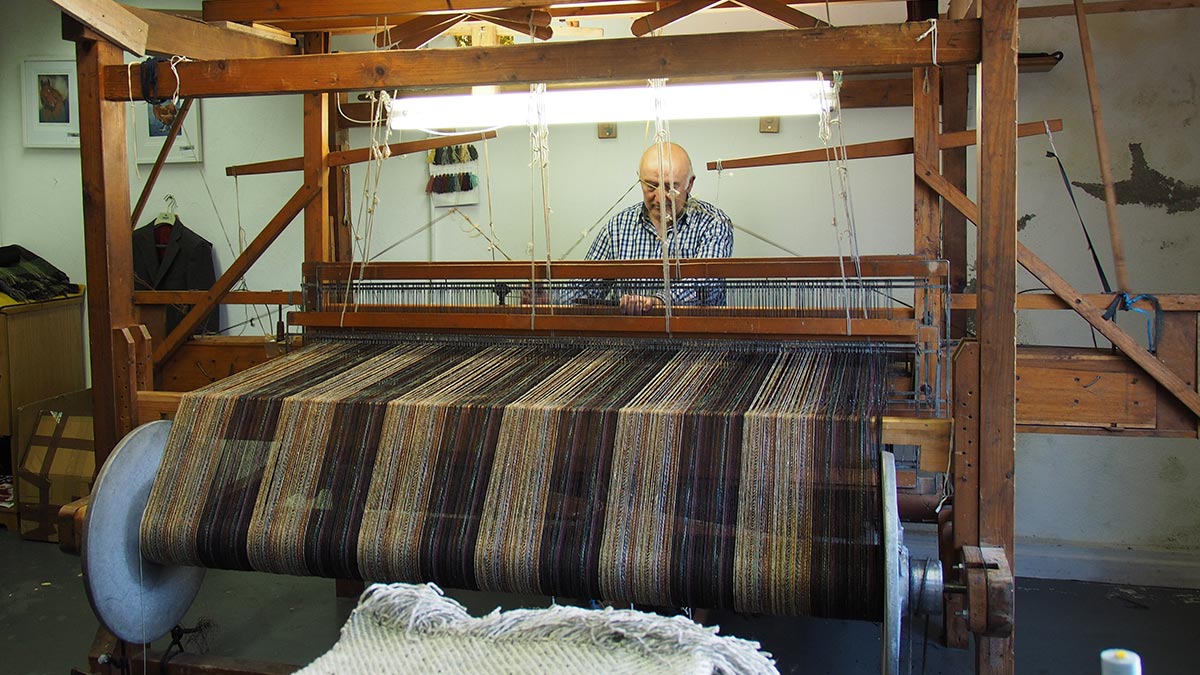 The first weaving must have been with branches from which to make a shelter. This was closely followed by the crude weaving of tree bark to form some covering shelter. Animal skins and hides also provided body protection and it is easy to see the logical step to the weaving of animal hair into a blanket type cover. Textile weaving from a single thread (knitting or crochet) or from many threads (weaving) is a very ancient craft. 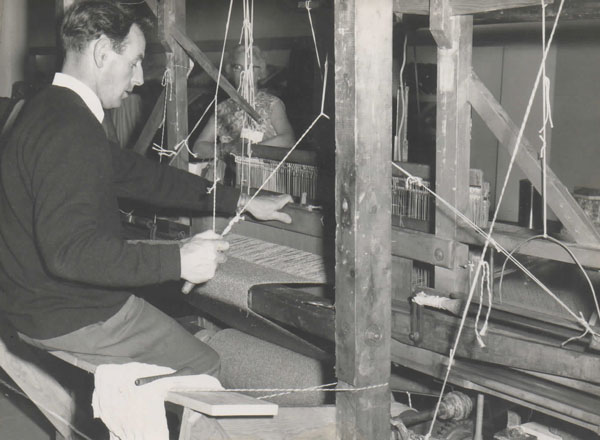 Donegal was rich with the natural ingredients for the craft of weaving to flourish. Donegal’s geographical location in the rugged Northwest coast of Ireland, in remote mountainous and boggy countryside meant that little outside influence prevailed and for many centuries the local chieftains encouraged the development of native crafts. Their extensive travels in conjunction with the church in mainland Europe influenced their ideas on patterns and colours. The fact that they had a growing market in Europe to wealthy merchants, this gave the people of Tyrconnell the ability to maintain an arrogant and financial independence from outside domination. This was all to change with the flight of the Earls, and gradually English influences changes profile and livelihood of Donegal for ever. The profitable European trade was quashed and the exploitative attitudes of the implanted landlords rapidly diluted people, Culture and traditions of Donegal. This included to use of sanctions against the wool trade which had been used by the Crown against Ireland from the middle of the 16th century. Penal laws impoverished the people and left them with no right of ownership. The famine of 1846 was a countrywide scourge which cleared millions of people from the Irish landscape. In an attempt to improve the lot of the people of south west Donegal in 1880 Mrs. Ernest Hart helped set up the Donegal industries Fund with a grant from the English Parliament in promoting local crafts and skills which could improve the economy of the area. In 1893 an improvement scheme supported by the congested districts board was started in Ardara, to help to make the production of Donegal Homespun in to a marketable commodity. Improved methods of yarn spinning, Hand weaving and inspection of the finished tweed soon elevated Donegal Homespun to the International Fashion markets of the world. This was a very successful Enterprise for the Ardara area and every second home in the parish had a hand weaver working. The tweed was exported by local firms Molloy & Company, Mc Nelis & Company and Magee & Company. Two of these companies are still involved in the weaving of Donegal tweeds today and supply fashion designers around the world. 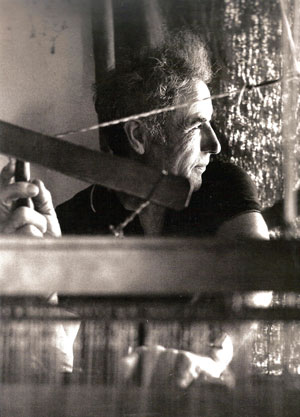 Hand weaving of Donegal Tweed is the crossing of a warp (threads running length ways) with a weft (threads running across the warp). The weaving of warp and weft is the making of Donegal Tweed. The loom of centuries ago was more than lightly of perpendicular construction and very similar to those used in the making of rugs in Asian countries, where the shuttle (weft holder) is worked across the warp between the threads by hand. In the early 18th century a horizontal loom, a frame with a sleigh, reed and heddles was made. The introduction of the flying shuttle revolutionised hand-weaving and greatly increased output. This is the loom type on which 100% of Donegal handwoven tweed was woven and still is woven on today.

The tradition in hand-weaving Donegal tweed is to use a white (Bainin) warp. The coloured weft can be entered as Tabby (under one, over one) or as Twill (under two, over two or under one, over three) or as Broken Twill, the commonest of which is Herring-Bone. These three are the most commonly used when tweed was handwoven. 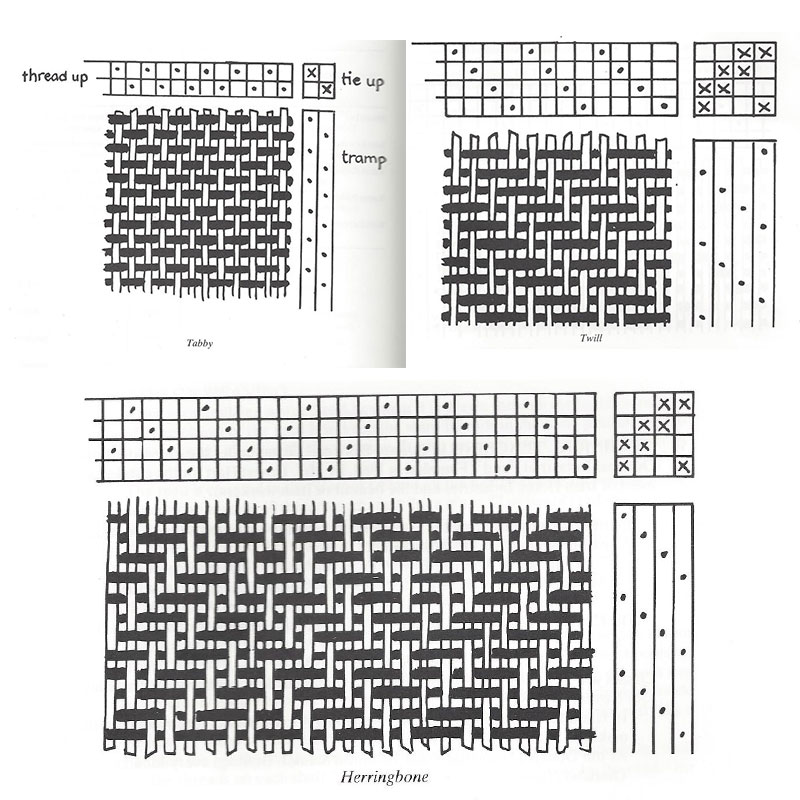 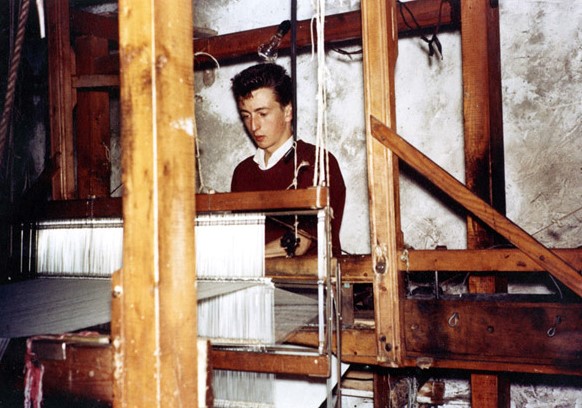 Washing: The washing or finishing process is the one which makes “Donegal Tweed” the cloth with its distinctive character.         Original Donegal Handwoven Tweed Labels 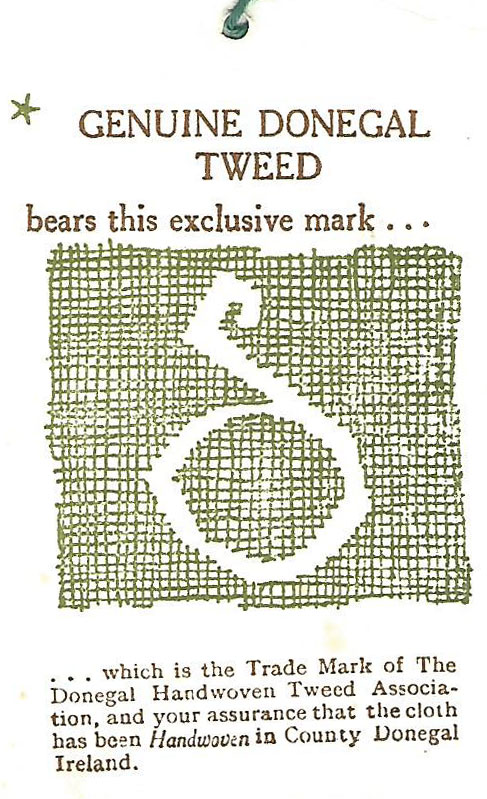 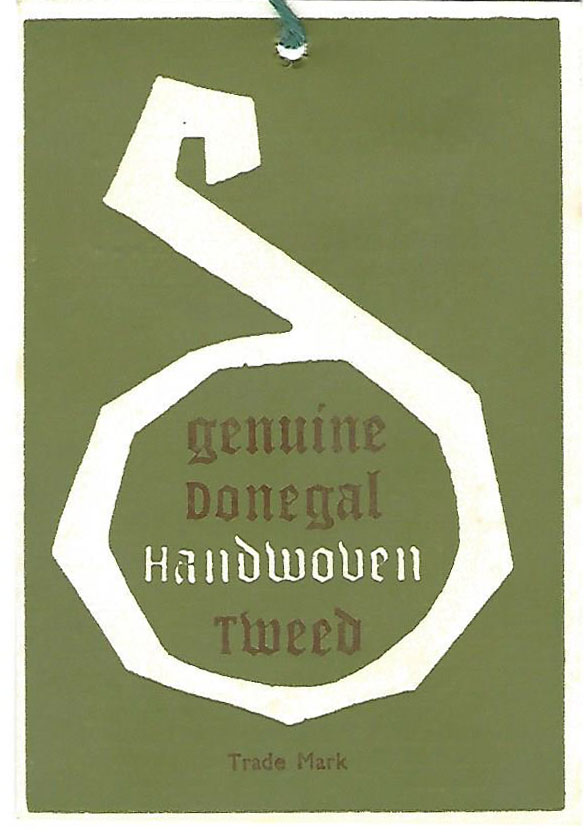