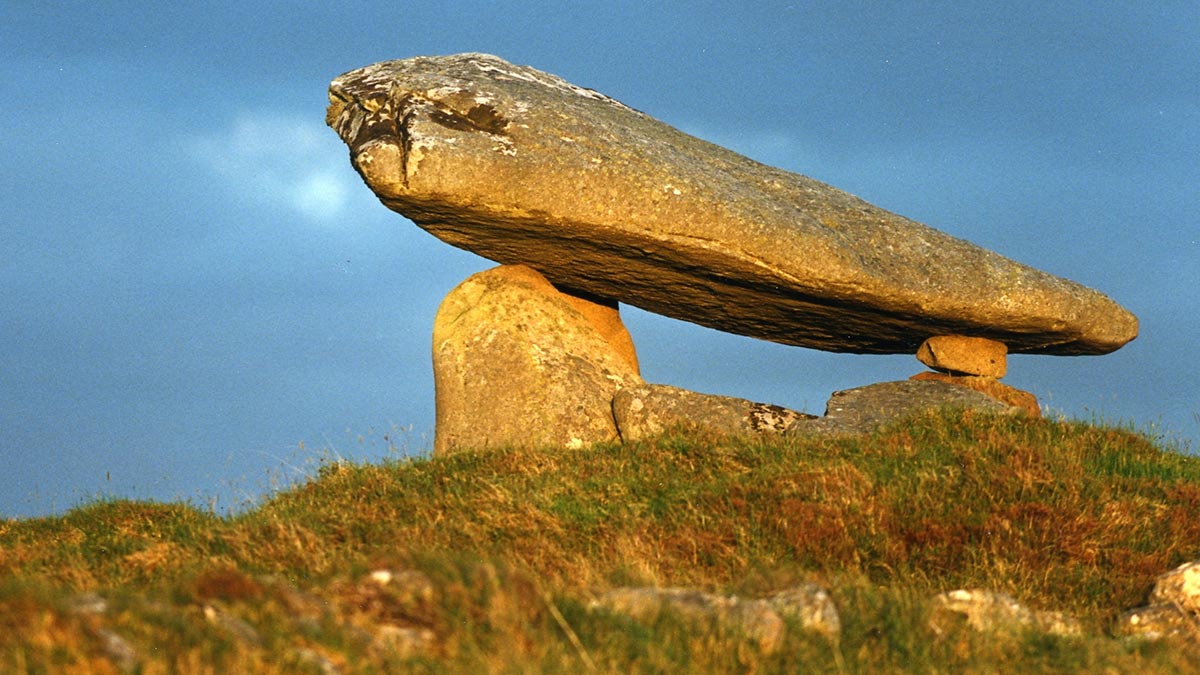 Ardara and its hinterland has a rich built and cultural heritage. There are a number of archaeological monuments of note in the area which date from prehistoric times. These are the Neolithic (c.4,000 BC to 2,500 BC) portal tombs (dolmens) at Kilclooney, Lackaweer and Lackaghtermon, and the court tomb at Kilclooney. Evidence of Bronze Age (2,500 BC to 600 BC) activity in the region consists of the standing stones at the Owenea Bridge, sometimes known as Finn MacCool’s shoulder stone, and those at Mullivea, Lough Fad and Kinnoghty. There are a series of earthen ringforts dating to the early historic period (c.500 AD to 1,000 AD), the most notable of these is the ringfort from which Ardara got its name: Ard an Ratha (‘height of the fort’).  Other earthen ringforts are located closer to Glenties and they include Kilrean Upper, Stranoglogh and An tSeanga Mheáin. 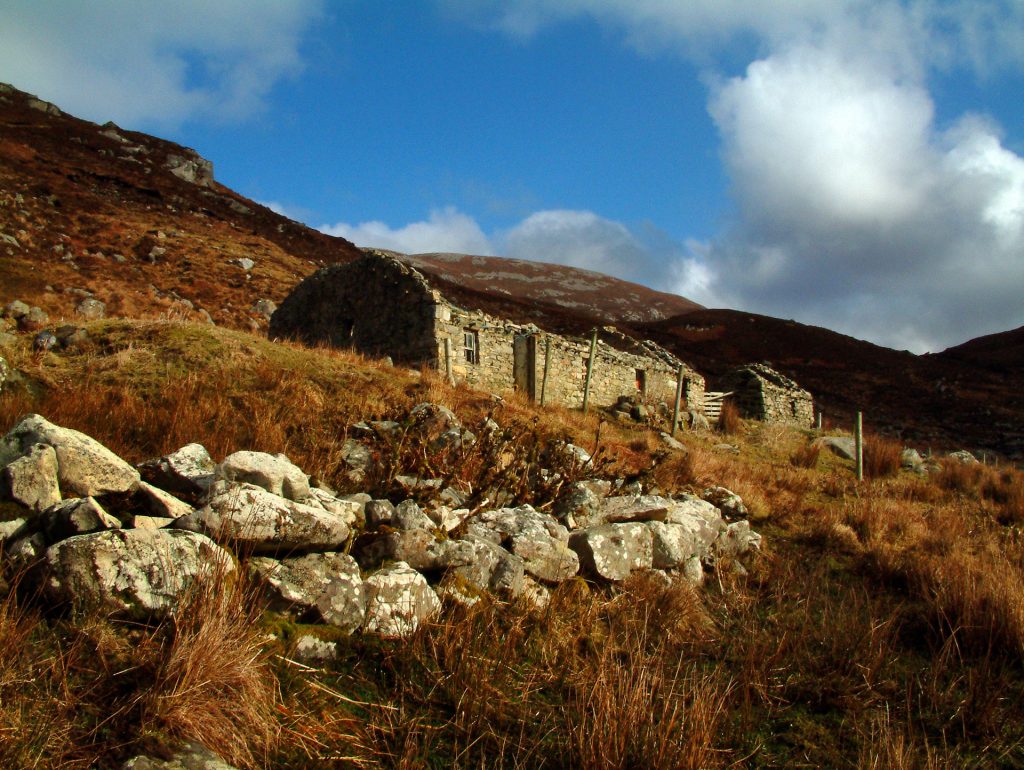 Monuments similar in type to earthen ringforts, but enclosed by walls of drystone are known as cashels. There are over twenty located in the area from the Gweebara to south and east of Ardara. There are five cashels on Loughros Point and they include Kilcashel, Liskeeraghan, Drumirrin, Cloghboy and one on the island of Inisfallen. There are cashels in Common and Cashel townlands just south of Ardara. There are at least five cashels east of Ardara in Cashelodoherty, Stormhill, Doochill South, Gortnacart Glebe, and Clonconwal. The Rosbeg area has four cashels but one is of outstanding proportions and forms part of the Western Stone Forts series of monuments.

A massive drystone fortification, Doon Fort is hidden on an island in Loughadoon. Referred to as the ‘jewel in Donegal’s crown’, a narrow entrance leads into an interior almost 37m across. There are two wall passages on either side of the entrance. One leads to the top of the wall and the second exits at ground level. Internally, there are four flights of stairs giving access to the parapeted wall top. In the same lake there is a smaller cashel and another nearby in Lough Birroge. Doon Fort is a veritable paradise of medieval archaeology, folklore, mythology, romantic history, wildlife, flora and fauna. 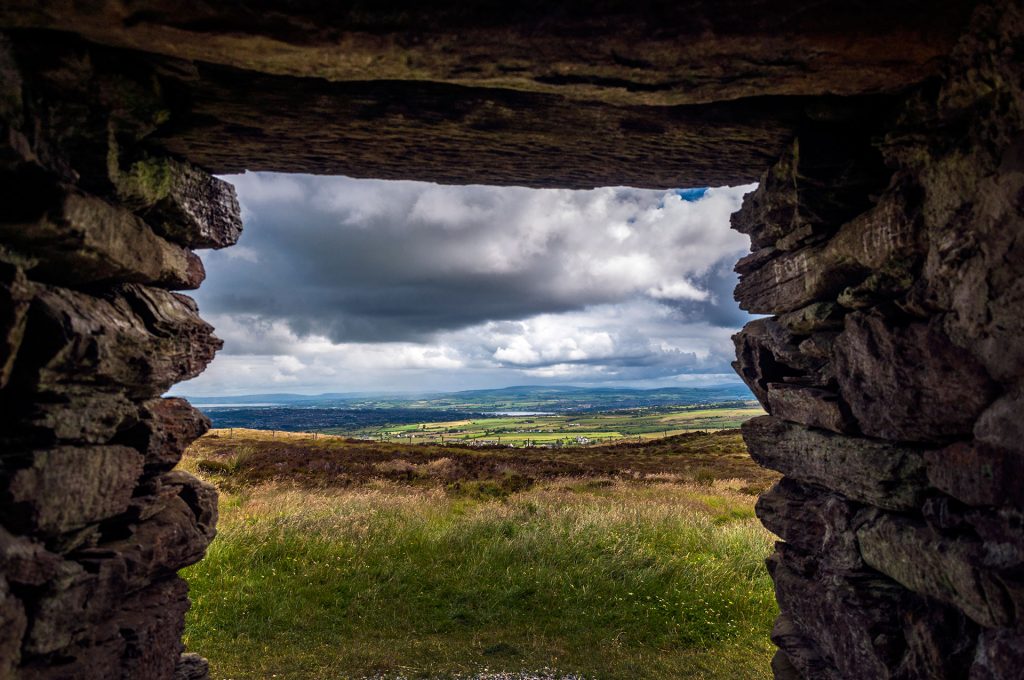 These extraordinary fortresses have been found along the Atlantic edge of Europe, from Portugal and Spain right up to Scotland. In Ireland they stretch from Kerry to Donegal. Doon Fort is a must see monument for anyone visiting the Ardara area.

The ecclesiastical monastery, founded by the 6th century St. Conall, on Iniskeel Island off Narin strand, Portnoo has a host of fascinating things to see. The two churches on the island, St. Conall’s and St. Mary’s are often referred to as the ‘the church’ and ‘the monastery’ respectively.  While the structures are of relatively recent date, it may be that parts of the ruins of the earliest churches are incorporated in them. Within the graveyard are a number of exciting cross slabs. Most notable is the interlace slab, the swan slab and the recumbent slab.

The latter has a unique depiction of the crucifixion where Christ is fully clothed and there are lots of imagery surrounding him. The ‘Swan’ slab appears to bridge the gap between pagan beliefs, perhaps sun-worship, and those of the new Christian faith. Both sides are decorated with an interlaced cross. The large boulder in the graveyard is known as ‘St. Joseph’s Bed, while St. Conall’s bed is located beside his holy well on the north side of the island. There is a tradition of doing the turas (pilgrimage) on Iniskeel and the rituals and cures associated with it. St. Conall’s bell and shrine are closely linked to the pilgrimage to the island. Indeed the story of Iniskeel is bursting with historical fact and folklore and is a truly magical place.

There is much more to Ardara and its surroundings than this vignette has given – a trip here will not disappoint!

(Please note: most of the monuments mentioned are in private ownership and prior permission is needed before accessing any site.)